I took a night bus from Zadar to Dubrovnik. Why? Because it’s an easy way to save money. If I slept on the night bus and arrived early in the morning, I would essentially have a free night. As Dubrovnik is literally the most expensive city in Croatia, this was imperative to me.

I commandeered the back of the bus and fell asleep quickly. However, I did not realize we would be going through Bosnia. There is a bit of Bosnia that cuts through Croatia, so anytime anyone goes through Dubrovnik, they need to go through customs. I had packed my passport below the bus in most of my stuff, and had not been counting on needing it. Bosnia is not part of the European Union.

I did, so I was woken up by the Croatian border patrol on the way through. Imagine my surprised look! Obviously, I should have realized that when I looked at the map, but for some reason, I assumed that buses had some kind of uninterrupted route through the country, as they depart from Croatia frequently. They don’t. For the trip to Dubrovnik, just have your passport ready for the border patrol.

Thus I arrived in Dubrovnik exhausted, at about 6 in the morning. I walked the 2.5 miles from the main bus station to the old town, where my hostel, King’s Landing Hostel was located. Unfortunately, as I approached the door, it became apparent that I would not be able to get in until about 11am. Sighing deeply, I shouldered my 13 kilos of backpacker gear and walked down the several steep, gorgeous, steps leading into the city.

Luckily, at 7am it was quite deserted. I explored the city independently, unhindered by the frequent and pervasive crowds that normally envelop the city. Everything is Dubrovnik looks white, polished and elegant. I walked around, dazed and impressed by the beauty, until I arrived at a cafe in the main square. Desiring a rest, I set my stuff down and ordered breakfast: a cappuccino, asparagus, mushroom and feta omelette, and unlimited warm bread. And, that’s when I noticed the price: 93 kuna! For breakfast! That’s roughly $15 USD. That doesn’t sound like a lot, but in the rest of Croatia, breakfast costs so much less. However, the food was absolutely delicious, and the view was spectacular: the cafe abutted the main square and I had a view of the deliciously white church and several sculptures as I ate. 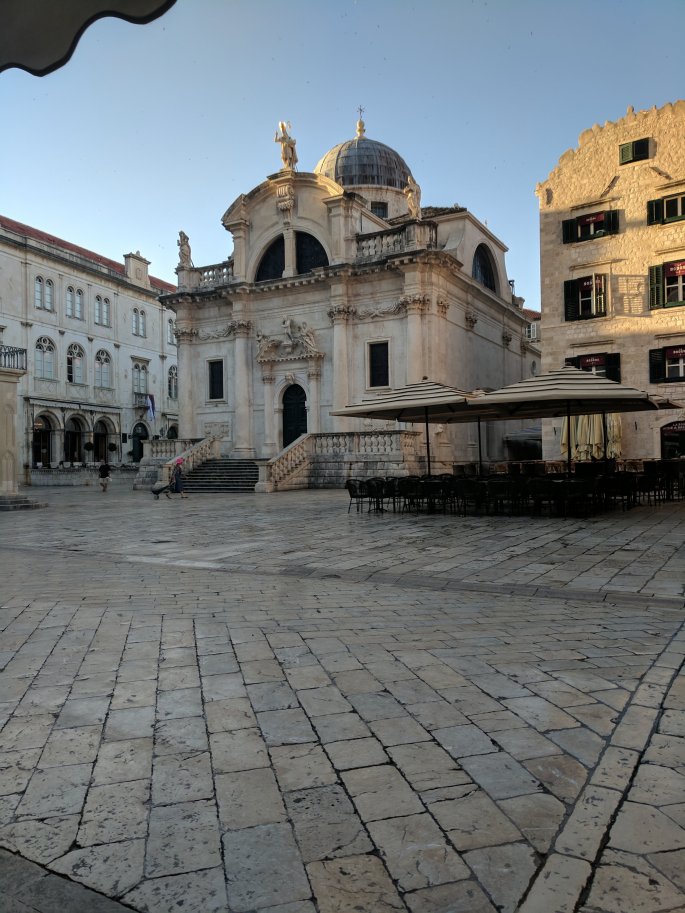 After breakfast I decided to continue walking with my luggage. I saw the beautiful harbor, the walls surrounding the city, and the small, narrow, limestone streets covered in plants and wildlife. Additionally, I saw where the Prince of Dorne was killed in Game of Thrones, King’s Landing, and the very steps where Cersei Lannister was shamed. There is actually a tour you can pay to do, but you can also download the tour online and take yourself around to explore.

Around 11am I was able to leave my stuff at the hostel. I changed into my swimsuit and went to the harbor I had spotted earlier- it was next to the walls of King’s Landing. While there I heard two American accents, so I quickly introduced myself. The sun reflected off the limestone walls and stones, and we decided to jump into the Adriatic Sea. The refreshing water engulfed my face, and felt like a dream. Throughout Dubrovnik, you can see down to the bottom of the ocean, so as we were swimming, we could see small fish circling our feet.

After the swim, I went back to the hostel to officially check in (I couldn’t until 2pm) shower, and rest before a late lunch with my new American friends. We found some authentic Croatian food, and agreed to meet up later. However, I still needed a nap, as I was exhausted. After, we met up to explore the city at night and enjoy the sunset from an outdoor area.

The backdrop was absolutely gorgeous. Although Dubrovnik can be expensive and touristy the unique beauty of the city, and the white walls of the city juxtaposed to the beautiful azure-blue of the Adriatic sea make the trip worth it.

One thought on “#GoCroatia: Game of Thrones and The Pearl of The Adriatic”